Dr.Afroz Fathima graduated (B.U.M.S-Bachelor Of Unani Medicine And Surgery) from Govt Unani Medical College in the year 2012. She obtained her Post Graduation MBAHCS-MBA In Healthcare Services From Sikkim Manipal University in 2015.Her thesis work “Implementation Of Ayush In Multispeciality Hospitals” received huge response and appreciation from the Ayush fraternity .

Dr Afroz Fathima Co founded  Rahmath Medical And Therapy Centre at Bangalore in 2010.As a Unani Physician she has a sound knowledge of the system and is Practically experienced in Hijama therapy, massages, and leech therapy. she has successfully completed projects on Skin Diseases, Women and Child Health Care, Temperamental Analysis.

She has Participated in National and International conferences and carried out Research works  on Hijamah  Therapy  and leech therapy ,presented a paper on hijamah therapy at symposiums.She has Actively participated in Women Health Education Programmes and Conducted general health camps at both urban and rural areas.

The Implementation Of Ayush Medicine  At Multispecialty Hospitals.

Health Education For The School Girls

Infertility Survey And Counseling Among The Females

Naturopathy Diet Survey Among The Geriatric Group With Their Deficiencies.

Social And Preventive Medicine  For Dengue .

Management Of Chikungunya With The Alternative Medicines.

Effectiveness Of Leech Therapy In Psoriasis And Varicose Veins.

Conference On Development Of Unani At Calicut Organized By Hermas Pharmacy

Conference On Kasini And Its Wide Medicinal Uses Hosted By Kasini Hospitals , Vanambadi

Appreciation award received from the Founder Director of European Institute Of Islamic Medicine in 2014.

Appreciation award received from the Chief Minister of Telangana in 2016.

AAFIYA HEALTH CARE CENTRE was awarded as the BEST UNANI ESTABLISHMENT IN INDIA BY UNANI MEDICAL ASSOCIATION (UMA) Hyderabad on the occasion of WORLD UNANI DAY 2018. 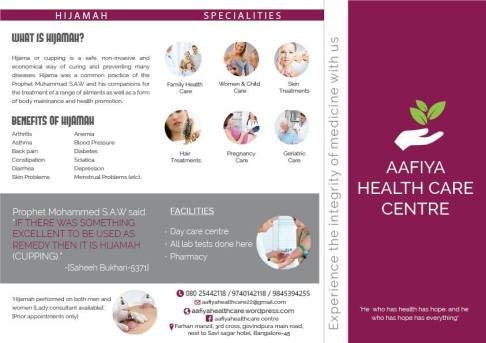 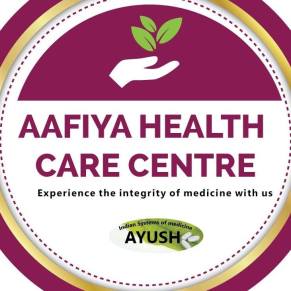